Those Pesky Prepositions for Bilingual Speakers

Those Pesky Prepositions for Bilingual Speakers 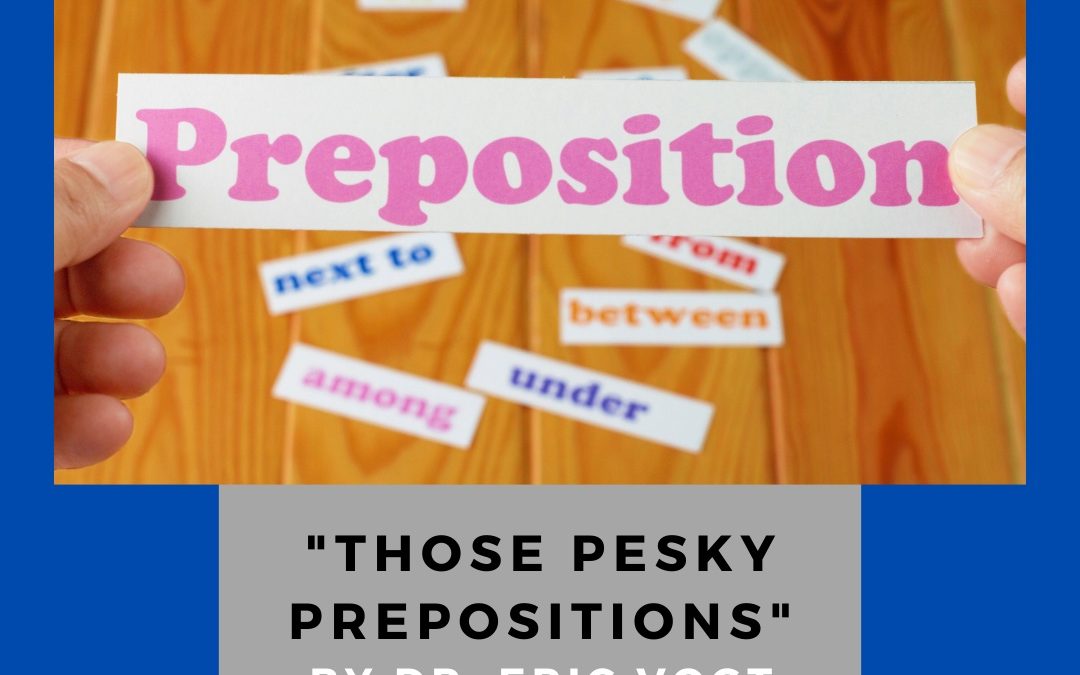 If you are bilingual in English and Spanish, regardless of which is your dominant language, you have probably had moments of doubt about which prepositions to use when working in either language.  You often may even wonder whether or not to use one at all. The problems posed by prepositional usage can be frustrating and seem ironic, considering that there really are not that many of them in either language.  To make matters more deceptively simple for novices, they do not have one-to-one translations. I say “deceptively simple” because the bad news is that oftentimes, and with no immediately apparent reason, the two languages do not use the same prepositions with the same verbs.

If there is any good news, it is that in the majority of cases, the prepositional usage is the same in both English and Spanish. The problem, therefore, can be cut down to size somewhat. This blog will not solve your problems once and for all, but I hope that it will offer you a strategy for solving your questions in both languages.

So, to begin sorting things out, the first thing to do is identify the high-frequency cases and, frankly, memorize them. Probably the most famous because it appears in textbooks for teaching English to Spanish speakers and Spanish to English speakers, I refer to the difference in prepositional usage between casarse con (alguien) and to marry or get married to (someone). By analyzing the Spanish verb, you can be satisfied that the preposition con is the only one that makes sense. First, note that the use of the reflexive pronoun se means that the verb expresses a mutually reflexive action. Of course, the reflexive pronoun can change depending on the verb conjugation, but that is a different and unimportant detail where the preposition is concerned. Let’s focus on the verb and break it down: casar. The noun from which the -ar verb is formed is casa. Next, recall that there is an English verb to house, in which the s is pronounced like a z to make the distinction in speech. Thus, the infinitive form means, quite literally, to house oneself with (someone).  As for the English, the verb “to marry” contains no such reflexive concept. In fact, a preposition is not needed in most common constructions such as John married Jane. Only in John got married to Jane is the preposition needed.

Two other high-frequency cases simply need to be memorized because there is no way to conveniently discover a logical reason as we did with casarse con. They are constar de and consistir en, both of which are followed by complements: either a noun (or noun phrase) in the first case or an infinitive in the second: El libro consta de quince capítulos; El trabajo consiste en hallar una solución.

Note that the English verb phrase to consist of stands as the convenient equivalent for constar, and yet its usage does not correspond neatly to situations in which consistir en is used in Spanish. Taking the example above: The work consists of finding a solution sounds very strange to the native speaker of English. The only practical thing to do in this case, unfortunately, is to memorize them.

There is one pair of English prepositions that cause trouble for Spanish speakers: in and on. One way to keep them straight is to consider their compound forms or closely related concepts, because they tend to be a bit more specific, and easy to visualize. Thus, inside and into help you remember that conceptually, the preposition inrefers in some way, either literally or figuratively, to the concept of some noun being inside another or moving into some other space.  Examples: John is in the house. The mouse went in the pantry. By contrast, when using the preposition on, English speakers stop at the surface, so to speak, as when one says: The flowers are on the table(and, one might add—in the living room). You could object to this simplification by asking why, in English, it is correct to say: He went to the store on Monday but He visited his grandmother in June. Both are expressions to show a time when something happened. This distinction requires a bit of imaginative visualization. If you consider Monday like a square on a calendar, you might visualize John as a figure standing on that square. But June is a bit too big a square for John to stand on all at once, so it is visualized as a space-time, or a room during which one lives and into which one enters on the 1st, continues to move deeper into until exiting on the 30th. Likewise, you put tasks on your agenda like items sitting on a desk to deal with.

In addition to establishing literal, space-time relations, prepositions also work figuratively in both languages, such as when one says: Quantum physics is over my head or Tengo trabajo hasta las cejas. No native speaker of either language would think of either expression as being literally factual.

Beyond these specific examples involving common problem areas, there lies an ocean of verbs in both languages which require specific prepositions that in the other language may require another—or will change meaning greatly depending on the preposition used. In English, this a category of verbs called phrasal verbs (often referred to simply as phrasals) because they are composed of a verb plus a preposition which can radically change the meaning. What is important to know about them is that they are very high frequency and that there is no one-to-one correspondence of the English verb part of the phrasal verb to one Spanish verb. Thus, in either direction, there is much to be aware of. One way to explore phrasals is to look for the following verbs in the English side of a bilingual dictionary: do, get, go, make, and put. Take note of how many Spanish verbs are offered as equivalents and the succession of meanings that result from simply changing the prepositions which follow these verbs.

In order to bring order to the process of mastering prepositions, it is good to begin making a list of the ones that trouble you personally. It also helps to take note of any prepositions as you read or listen to items that are produced by native speakers of each language for consumption by native speakers. Making a daily habit of highlighting all the prepositions in newspaper articles in both English and Spanish will also help give you confidence about prepositional usage as you speak or write in either language, and make you more aware of the noteworthy differences between them. In addition, there are numerous dictionaries of phrasal verbs available from many publishers which can be found online.