Improve Your Writing Through Imitation, Part One. - Translation Skills Training

The Spanish Superlative Degree of Comparison 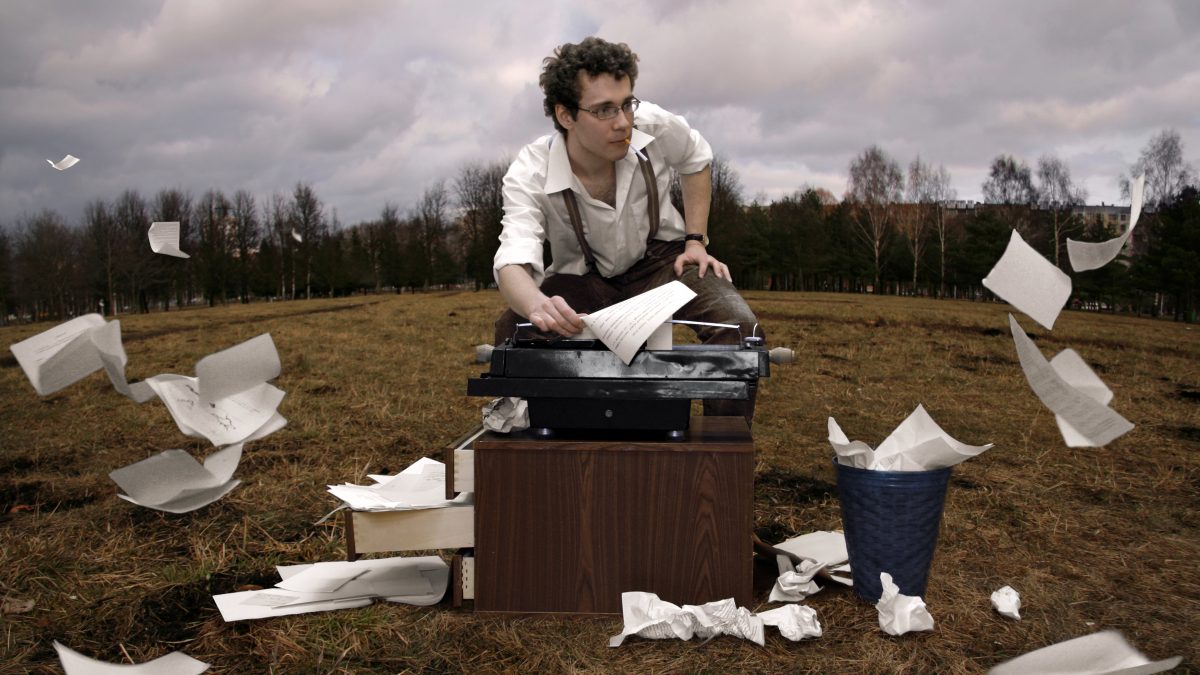 The writer is in a process of creation of his new novel. He is situated outside and a lot of sheets of paper fly around.

Aside from pedagogical questions surrounding the inculcation and acquisition of technical skills, of all the topics that teachers, critics, writers, translators and artists study, debate and struggle with, imitation – or mimesis – is probably the most polemical.  Of the three roles Analytic Linguists perform in a wire room (monitoring, transcribing and translating), translation is the task that involves imitation to a high degree.

Once translators recognize that there must be some element of imitation involved in translation, they must make a conscious effort to examine and analyze how imitation has been and can be understood, so as to avoid applying notions of imitation in their work that would lead to over-reaching, exceeding or otherwise abusing the parameters that circumscribe the practices that produce good translations.

Therefore, taking into account the recognition that translation, being a re-creation, is a form of imitation, we submit the following prescriptive advice to translators:  A translator must not add, omit or change the meaning of a source text by embellishment, word choice, tone or register which could prevent them from rendering in a second language an accurate, complete and faithful imitation of that source text.  At nearly every moment in translation, there are always choices to be made, as one previous blog of ours examined.  These choices need to be made so as to create as faithful an imitation of a source text in the target language as the target language makes possible.  Thus, just as a good translation is defined in part negatively, we can also say, albeit tautologically, that a good translation is a faithful imitation of a source text when it is not unfaithful to it.

In this Blog, we briefly examine some of the ways that imitation (mimesis) is understood in art and their possible applicability to the language arts and how these different ways could influence a translator in positive or negative ways.  The analogy between painting and poetry was made famous by the Roman poet Quintus Horatius Flaccus in his work Ars Poetica.   Since the analogy has stuck around ever since, it is fitting that we should attempt to examine its usefulness to Analytic Linguists, particularly in their role as translators.  Some aspects of the theories of imitation also can be useful to them in their role as transcribers.

One notion of imitation is a time-honored practice for teaching painters and sculptors (although certainly not the only pedagogical method).  It requires the learner to make an exact copy of a work that is considered to be among the best representatives of a particular art form.  For advanced students, this likely requires them to use the same media and tools.  To experienced professional translators, it is a big stretch to apply this form of imitation to translation, but there are people (usually clients) who ask for a literal, word-for-word translation of a document.  From the perspective of professional translators, such clients cannot possibly mean or understand the implications of what they are saying and these statements become moments for client education.  It is also important to note that each language is a medium of its own, analogous to a different brand of paint or type of stone, so translations cannot be exact copies in the same way that applies to the plastic arts.  In their work, Analytic Linguists are well advised to learn to avoid literal translation.

Another notion of imitation involves direct observation of nature or a subject to be represented.  This form of imitation in Western art has its roots in the Renaissance.  In more recent forms of the plastic arts, this type of imitation may be exemplified by a variety of styles, ranging from realism to photographic realism, although as an artistic movement, this latter one differed in that it did not observe nature, but rather already reproduced images (e.g., photos).  This notion of imitation in art may seem to be strongly analogous to translation but it is more applicable to the mental operations of reading and understanding a source text.  For this reason, this notion of imitation in art is incongruous since it only accounts for half the process of translation: understanding the source text.  Though incomplete to be analogous to translation, Analytic Linguists still can apply the injunction about observing to their role as transcribers, by carefully listening so as to understand a court-ordered oral communication intercept.

Another form of imitation, which became a common practice for many artists in the Renaissance, is to take the best and most perfect parts of one thing and create a new, perfect representation.  This could mean observing many real people, and noticing how one person has a perfect nose and another with perfect arms, and so on, to create an image of a person that does not really exist in nature in any one person, but does conform to some canon of perfection held by the individual artist – or a client.  This is best exemplified by Leonardo da Vinci’s famous work, the Vitruvian Man, which results from a mathematical model described by Marcus Vitruvius Pollio, the 1st Century BC Roman architect most active in the reign of Caesar Augustus.  This notion of imitation is useful to Analytic Linguists in their work as translators because there are many high-frequency words and expressions whose best translations could and should become a part of their linguistic tool kit.  As an analogy for the translation process as a whole, however, it is also incomplete.

The last notion we shall examine is one that is associated with European Baroque art and Neoplatonism, according to which, everything that exists in the world we see is only an imperfect representation of the perfect one that exists, for argument’s sake, in the Mind of God.  Thus, every oak tree has similarities that identify each one with all other oak trees and yet none are the perfect oak tree. This approach to imitation requires the contemplation of the idea.

Although this conception of imitation is very abstract, perhaps it offers the most useful analogy because of the ways it can be applied to the work of Analytic Linguists in their role as translators.  It requires the translator to step back and deeply understand the essence of the message – and do so using critical reasoning and taking context into consideration – in ways that are similar to what an artist might do when, knowing all that can be known about the human form, has been commissioned to do a portrait of a living person.  Everything that the artist knows about the human subject as a social and political being could be as important as all the artist knows about anatomy, and the skillful use of brushes and paints on the canvas, light, optics and indeed, the totality of the context in which the portrait of a person is to be created.

This demanding notion of imitation reminds Analytic Linguists that they can never know too much in order to perform their duties as translators – and even as transcribers of a conversation.  For the artist, some minute detail that may seem inconsequential may be the most important one of all, as might happen by the use of costuming or objects appearing in a portrait of a famous person who wants to be known for some attribute or achievement.  Analogously, when transcribing, the Analytic Linguist may hear a word, a manner of speaking, a tone or some other quirk of speech may draw his or her attention and be a key to understanding a message.  Such a detail may even be a sound in the background.  Subsequently, in translation, the importance of such a detail has to be rendered into the target language (English, in our case), so that its importance is apparent to a variety of end users who are likely to be monolingual: law enforcement, grand juries, prosecuting attorneys and defense lawyers, judges and juries. Now that we have covered briefly some theoretical aspects of imitation, our next Blog will offer concrete advice on how Analytic Linguists and aspiring ones can exercise their writing muscles and their translating muscles through imitation.  An understanding of the notions in this Blog will be helpful because they offer the practitioner ways to approach translation.  Stay tuned and remember, we invite your comments and suggestions for other topics.

How to Create a Lucrative Career Using Your Bilingual Skills